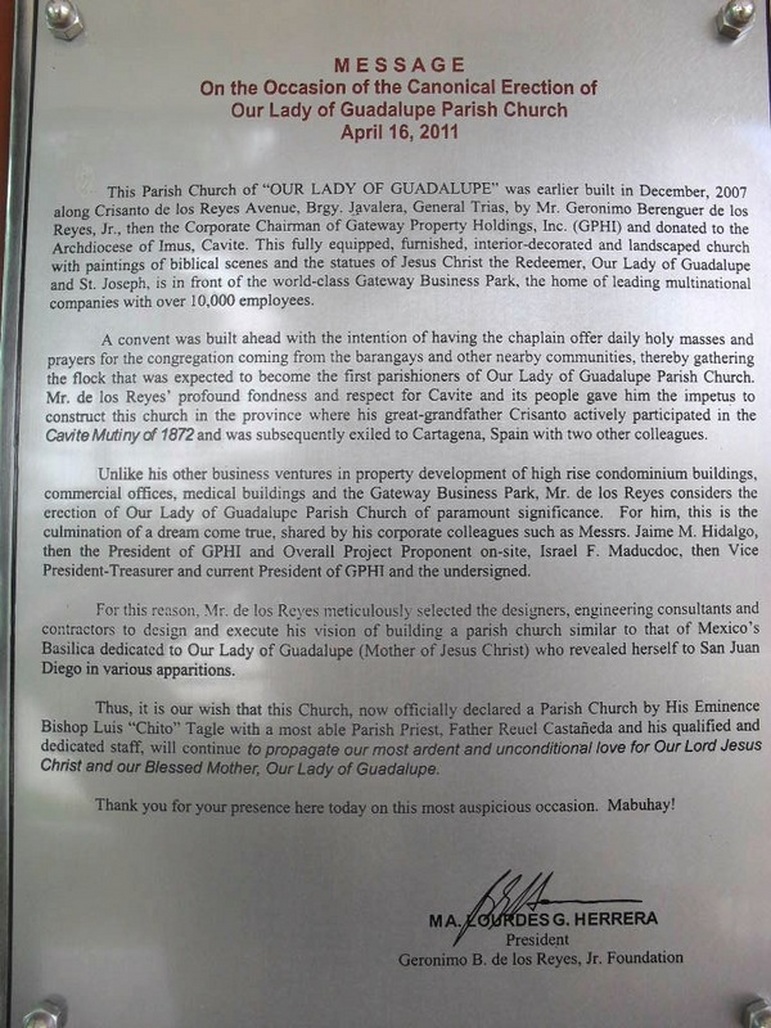 The Municipality of General Trias (Filipino: Bayan ng Heneral Trias) formerly San Francisco de Malabon, is a first class municipality in the province of Cavite,Philippines. According to the 2007 census, it has a population of 218,387 people in a land area of 81.46 square kilometers.

In recent years, with the opening of Gateway Business Park in 1991 and other industries in Governor’s Drive, the southern part of the town experienced a rapid increase in population. New subdivisions were opened and new apartments were built to house the workers who majority of their families chose to stay in the area. As of now, there are 21,508 residents in the area (Biclatan, Javalera, Panungyanan and Alingaro) plus the transients.

On the 22nd day of August, 1998, Mr, Geronimo de los Reyes, Jr., who was represented by the President of the Foundation in his name, Mr. Andrew de los Reyes, donated a parcel of land with the intention to build a church there in honor of Our Lady of Guadalupe to Rev. Bishop Manuel C. Sobrevinas, Bishop of Imus at that time. It was witnessed by Mr. Jaime M. Hidalgo and Rev. Fr. Romeo O. Ner.

On December 12, 2007, as an act of gratitude to God and Our Lady of Guadalupe for miraculous healing of beloved daughter, Saralou as well as the fulfillment of his childhood dream, Businessman Geronimo B. De los Reyes completed and inaugurated a huge and beautiful chapel in Mary’s honor with the concelebrated Mass presided by Bishop Manuel Sobrevinas. Our Lady of Guadalupe Chapel serves as the chaplaincy for Gateway employees since then up to now.

Multimillionaire Businessman, Geronimo de los Reyes realized one night in March 1991 that for all his wealth he would do nothing to ensure that his 6-month old daughter Saralou would live.

Saralou had a “hole in her heart” when she was born in August 1990 in Vancouver, Canada. This is a congenital heart defect which occurs when the heat or blood vessels near the heart don’t develop normally before birth, causing an inadequate oxygenation of the blood. This gives infants with the condition a deathly pale color.

Saralou needed an operation, but the Canadian doctors said she could undergo surgery only when she turned four or six. Four year could be a harrowing wait for the couple. They could not bear to look at their daughter without weeping. Saralou’s heart beat was “hitting the wall of her skin.” Her lips has turned blue. She was always gasping for breath.

De los Reyes and wife Lulu with the baby traveled from Vancouver to Manila and back to Vancouver, trying to find a doctor who could help them.

Against the advice of a Filipino doctor who warned that frequent air travel might be harmful to the baby, the couple flew to California where doctors at the University of California in San Francisco performed a very risky open heart surgery on Saralou. While she was fighting for her life, De los Reyes found himself walking into the Our Lady of Guadalupe chapel at St. Mary of the Assumption Cathedral on Gough Street in San Francisco. He knelt before the 10-ft high mosaic of Our Lady of Guadalupe and prayed for a miracle. It was probably the first and the only time in his life that he prayed so fervently. He prayed long and hard and promised that he would fulfill a childhood dream to build a church in honor of the Virgin Mary’s miracles. Saralou survived the surgery, which was believed to be through the powerful intercession of Our Lady.

As promised, De los Reyes erected a church in honor of Our Lady of Guadalupe. It is patterned after the awesome Basilica de Nuestra Senora de Guadalupe at the base of the hill known as Tepeyac, now called Guadalupe, in Mexico. This is the site where the Virgin Mary appeared before a humble Indian laborer, Juan Diego, four times in December 1531 and performed a number of miracles. Juan Diego was proclaimed a saint in rites presided over by Pope John Paul II in July 2002.

The original basilica in Mexico has nine chapels and can seat 10,000. Including standing space, it can accommodate 40,000 people at any given time.

Though a lot smaller than the original, the Cavite church is just as imposing, with its circular structure patterned after the Mexican basilica. It stands on a 5,745-sq.m. property in Barangay Javalera, General Trias, Cavite.